Peppa Pig is a children’s animated TV series that traces the adventures of Peppa, her family and friends. Peppa is actually an animal – a pig that possesses all the human traits and so do all the animals in the series – they speak, read, go to school, drive and do all we humans do. As of 2012 Entertainment One UK Ltd and Astley Baker Davies Ltd, the entities behind Peppa Pig, hold the following registered EU figurative trade mark for, among others, “clothing, footwear, headgear” in Class 25 of the Nice Agreement: 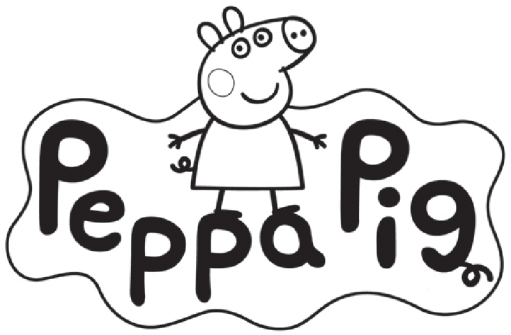 In 2013, Mr Xianhao Pan residing in Rome (Italy) succeeded in registering the following EU figurative mark for “clothing, footwear, headgear” in Class 25 of the Nice Agreement:

Peppa Pigs’ creators argued that considering the complete identity of the goods, the two signs are confusingly similar to the extent that the TOBBIA trade mark had to be cancelled.

On 21 March 2019, the General Court of the EU ruled that likelihood of confusion between the two marks exists and therefore the First Board of Appeal was correct in upholding the appeal and invalidating the TOBBIA trade mark (here).

Setting aside some preliminary procedural issues the meat of the General Court judgment was the comparison of the two signs. As usual, this had to be done taking into account the visual, phonetic and conceptual similarities between the two and evaluating the overall impression that the signs produce.

The Applicant before the Court, in this case Mr Xianhao Pan, insisted that there were no similarities between the two signs emphasising the fact that the animal in the TOBBIA mark is indeed a tapir as opposed to a pig – the animal depicted in the PEPPA PIG mark.

The Court admitted that the signs at issue differ in certain figurative elements: the colour range; the fact that the TOBBIA mark animal was in trousers, while the PEPPA PIG mark animal wore a dress; the PEPPA PIG mark had a tail and its arms were positioned in a different way as compared to the TOBBIA mark animal. Yet, the Court insisted that these differences were not capable of outweighing the similarities. Considering that the relevant public is the general one, which does not proceed to analyse all the various details of the marks but perceives them as a whole, the First Board correctly assessed that the marks were visually similar. The Board held that both signs depicted an anthropomorphic animal, namely a pig. The depiction of the head and snout were nearly identical, as well as the shape of the head and further elements on the face of the animals. The differences between the two were appreciated, but nevertheless the visual similarities were more.

The discussion on phonetic comparison followed the classical lines and confirmed some degree of correlation.

As far as the conceptual analysis is concerned, the Court was clear that that the general European public would perceive the two animals as a pig and thus conceptual similarity was also present.

All in all, the identity of the goods coupled with the similarity of the signs led to a ruling in favour of PEPPA PIG and a finding of likelihood of confusion.

An interesting discussion was brought at this stage by the Applicant in relation to the type of the animal in its TOBBIA mark. It was argued that the general public would be capable of recognising the animal in the TOBBIA trade mark as a tapir, which would have allegedly sufficed in drawing the line between the two signs. Well, the Court was certainly not convinced as it stated that the assessment of the similarity between the marks would in no way be affected “whether the public identifies the graphic elements of the two marks as two pigs or two tapirs.”

One may wonder on what ground would one even think about bringing the outlandish argument that the animal represents a tapir, which is an animal particularly well known to the public. Well, seems like the Applicant (or at least, its legal representatives), resident in Rome (Italy) is a fan of the Italian TV program “Striscia la notizia”, which in line with its satirical tone, awards public figures with a price in the form of a small statute for errors, omissions to keep promises or basic embarrassing situations. Not surprisingly, this statute takes the form of a tapir and looks like this: 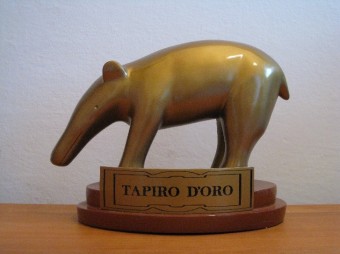 As entertaining as this tale of pigs and tapirs may be, the General Court was neither impressed nor convinced. It correctly pointed out the irrelevance of such argument as the relevant public at stake was the general European public (and not only the Italian one) taking into consideration the fact that the TOBBIA trade mark was a European one.

The case does not entail any ground-breaking analysis, nor particularly peculiar application of rarely raised grounds such as bad faith or intricate fiduciary relationship conundrums. Instead, it is a classic likelihood of confusion discussion comparing goods (which in the present case were even identical) and signs.

That said and regardless of how much weight one would give to the shared elements between the two signs (the presence of an anthropomorphic animals with identically shaped heads), one must admit that the two signs in fact bear rather minor similarities. The legal team of the PEPPA PIG trade mark would have been wise to raise further grounds of invalidity, namely to invoke Article 53(1)(a) in conjunction with Article 8(5) EUTMR, which provides famous marks such as PEPPA PIG with an extra layer of protection. In these cases lesser degree of signs’ similarity is required as compared to the classical likelihood of confusion situations under Article 8(1)(b) EUTMR. This would have guaranteed the ultimate success for the Peppa Pig creators provided that the relevant section of the public makes a mere connection between the marks, i.e. it establishes a link between them. This is a well-established principle following long-standing judgments of the CJEU in the Adidas (C-408/01), as well as the Intel cases (C-252/07).

Nevertheless, both the First Board of EUIPO and the General Court are to be complimented for having employed a very adequate level of common sense and rightly held that the TOBBIA mark shall be invalid in light of the PEPPA PIG mark. The analysis avoids crude formalistic application of dry legal principles, which may have risked resulting in a loss for PEPPA PIG as it is certainly questionable whether the similarity between the signs meets the standard required by Article 8(1)(b) EUTMR. Besides, the TOBBIA mark indeed resembles a poor copy of PEPPA PIG, which is further supported by the fact that the Applicant seems to be a trade mark squatter of children’s brands. A quick search on the EUIPO database reveals that the Applicant has unsuccessfully tried to register the following marks, which regardless of how far detached from childhood one is do certainly ring a bell:

This blog aims at providing a heterodox review of selected significant decisions and legislative Acts and Bills concerning Intellectual Property law and related matters, each of them reconstrued in its essential features, and critically commented.

Thus, we particularly address the happy many (?) who want to go beyond mere updating and descriptive overviews, and rather inquire into both the systemic coherence and the jurispolitical meaning (“who gains, who loses”) of the various legal “novelties” which attract our attention.

We are of course aware of the higher risk of ‘subjectivity’ that such approach implies. But we do believe that a critical reader is immunized against such risk, and privileges a more controversial but “salty” dish vis-à-vis an insipid one. And in this very spirit, however, we will welcome the readers’ comments: especially the critical ones.